Once learning is completed, models can be inspected by generating a report with the Report button 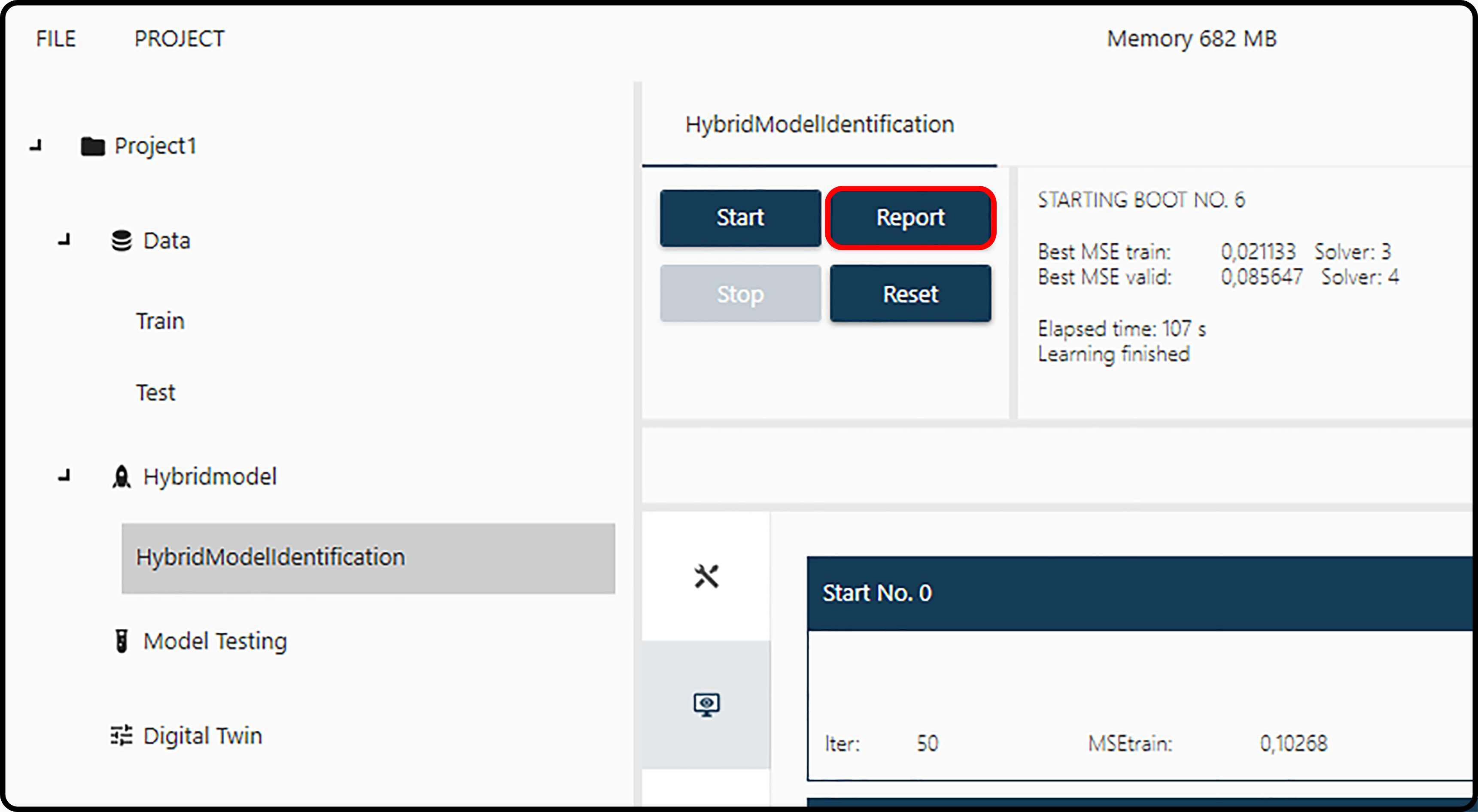 This will open a new window for selecting models. As many models as undisposed ones will be displayed. 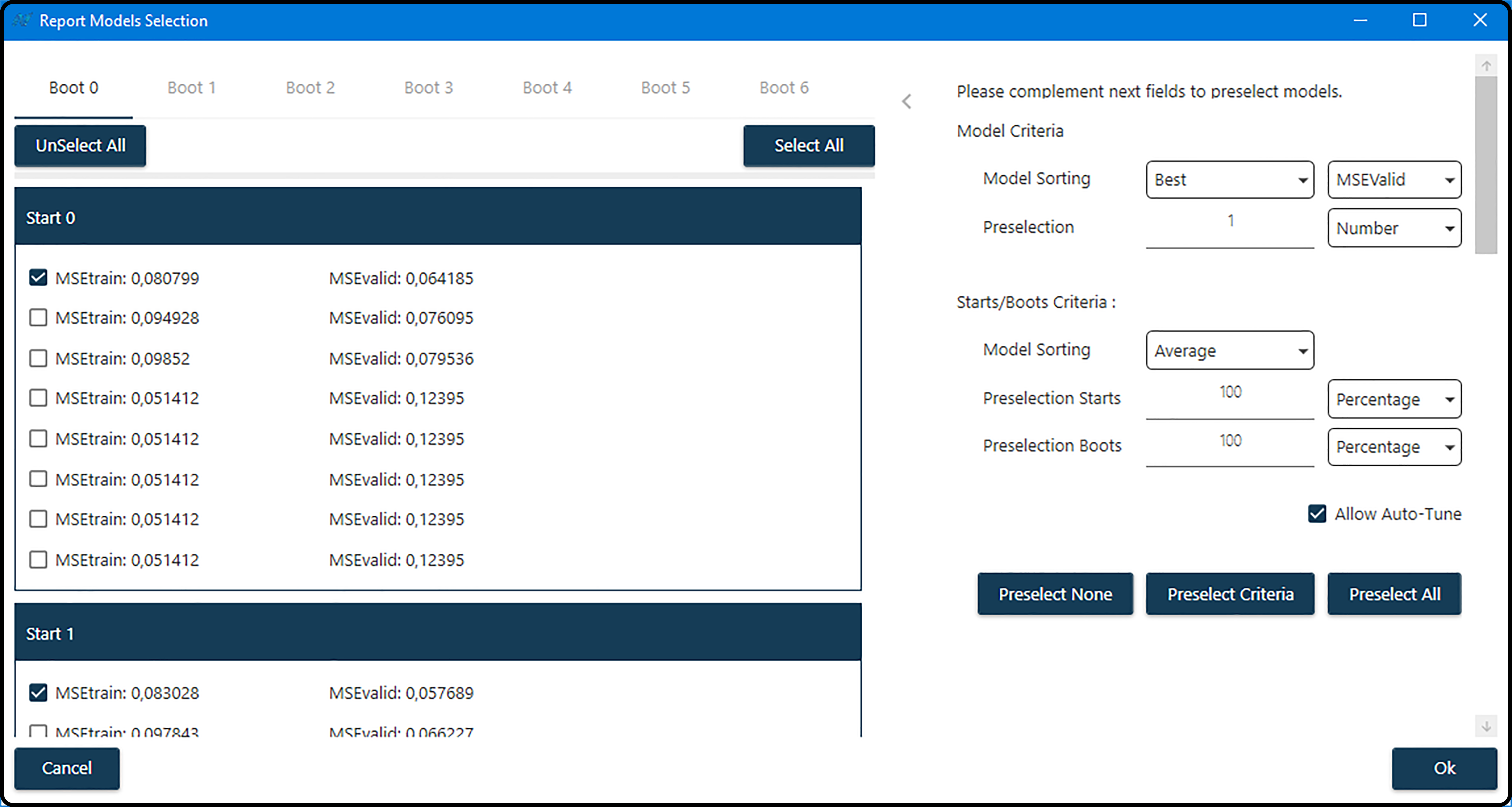 Following the identification structure, models are organized in boots and starts in the left part of the window. Each boot has a dedicated tab with as many sections as random starts were selected, containing all undisposed models. For each model, the training and validation mean-squared errors (MSE) are shown.

If the learning process was stopped by user, some starts and/or boots might be orphan as models where never generated.

As many models as desired can be selected/unselected from each available boot and/or start manually by using the checkbox. For a faster selection and/or deselection, each boot has the options Select all and Unselect all. This action propagates only to the current selected boot.

Independently of other Model preselection fields, when clicking Preselect none (or Preselect all), none (or all) available models (from all boots/starts) will be selected. This feature will be useful, if only a low number of models has been generated.

Typically, models will be sorted first according to various (quality/performance) criteria and the best performing models selected by clicking on the Preselect criteria button.

Any selection based on model and/or starts/boots criteria must be confirmed by pressing the Preselect Criteria button, otherwise these choices have no effect.

Example Assume the following setup: models were built with

From the total \(10 \cdot 6 \cdot 20 = 1200\) models, only the best 8 are kept for each boot/start combination, which makes in total \(10 \cdot 6 \cdot 8 = 480\) models appearing in the model selection window. Sorting according to the best \(\text{MSE}_\text{Valid}\) (lowest validation error) and preselecting 25% of those, leaves 2 models for each start/boot combination (those with the lowest validation error), in total 120 models.

Selecting Average in the starts/boot criteria model sorting, calculates the average error of these 2 models for each starts/boot combination, resulting in \(10 \cdot 6 = 60\) average errors. Choosing 50% as starts preselection selects the best 3 (of the 6) starts from each boot. Finally, the remaining 60 models (10 boots, 3 random starts, 2 models per start) are averaged per boot and choosing e.g. 50% as boot preselection only keeps \(5 \cdot 3 \cdot 2 = 30\) models.

It is recommended to leave the option Allow Auto-Tune checked. In case the user enters percentages don’t fully match with current boots/starts/models setup, these will be automatically reassigned to a value that makes more sense.

For example, assume learning contains 15 boots and it is manually stopped before starting boot number 2. In this case if Allow Auto-Tune is checked, Preselection Boots [%] will be set to 100% as only 1 boot was computed – irrespective of the user setting.

Once the model selection is completed, the report appears in the main bar. Clicking on it leads the user to the Reports section.

Figure 27. After model selection, the report appears in the top bar.¶

Switching between different reports is done via the drop-down menu – all reports will be numbered consecutively. The two main actions in the Report section are the generation of model quality reports (upper icon) and the visualization of the model performance via 2D plots (lower icon).

Figure 28. In the reports section either various quality parameters can be obtained in the quality report section or plots can be generated.¶